50 years of Terminal 1 at FRA: Milestone with wings

50 years ago today, three letters flashed particularly brightly on the world aviation map: FRA opened its Terminal 1 on March 14, 1972. The groundbreaking architecture paved the way for an international hub the likes of which Germany had never seen before. Frankfurt am Main thus moved into a league in which only London and Paris had played in Europe until then. Above all, the two generously dimensioned “stars” provided the basis for the growing rush of Boeing 747 jumbos, which were just entering service with Lufthansa, but also changed the business model for other global airlines such as PanAm or TWA.

The airport was also ahead of its time in integrating various traffic routes. Directly outside the front door, highways connected the airport to local and long-distance traffic. In the basement, the country’s first airport train station enabled direct rail-to-air transfers: both via public transport from the surrounding economic area and via DB’s new InterCity concept all cities in western Germany. “The opening of Terminal 1 marked the beginning of a new era at the airport,” said Dr. Stefan Schulte, CEO of airport operator Fraport, on the occasion of the anniversary. “Larger aircraft, short transfer times, an automatic baggage handling system that was unique in the world and an infrastructure that was state-of-the-art for the time ensured the future viability of the airport as Germany’s most important aviation hub. Together with our partners, we continuously developed the airport over the past 50 years.”

Today, Terminal 1 is still the centerpiece and a living example of successful site development. Under the motto “Building the Future: Transforming Terminal 1,” the entire property will be extensively modernised over the next few years. Equipped with modern technology, 16 newly arranged security check lanes will ensure an optimized passenger and transfer process from 2027.

As a long-time companion of Fraport, Sasse Group congratulates on the anniversary: “We are very pleased to be on board as a service provider at one of the world’s most famous airports. We wish the jubilee and his team, but especially Terminal 1, many happy landings and passengers.” 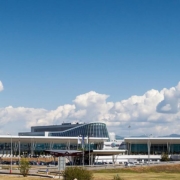 Forest as a key role
Scroll to top